An ideal portrait of the Graduate D. Gregorio Gonzalez, based on written and historic sources.

His profile is the one of a cultivated gentleman. He studied in the most important places in Spain, the University in Salamanca, Valladolid and in the Alcalá Trilingual. He is vastly cultured which is reflected in his cited works and in the enumerated prologues of great classics. He is a literary expert of his time and moment, the cunning (the best seller of the time) “Guzman de Alfarache” of Mateo Alemán is in a relieved position, he is Governor of the State of Alcandre in the Ramirez de Arellano Dominion, where he forms part of a circle of cultured people of rural nobility. In undertaking the work of art, the mood is established, through the post which he occupies, through his educational background, one can calculate that he is a young man not reaching his fifties yet.

The portrait catches this important figure in his work place like a governor or an administrator with an account book, a fountain pen in his hand and amongst documents and desk-top books, “Guzman de Alfareche” and the manuscript The Güiton Honofre (opened on Chapter 13).

it is in its original rectangular shape. He is dressed moderately in a black gown and cape, he wears a grand tulle and lace throat covering garment which was the trend in 1600 under King Felipe II as well as a moustache and a goatee. I thought it was interesting to highlight his calligraphy as a beautiful way to compose his artistic side by displaying his diminished writing.

For his clothing the great portraitists of the moment have been a great visual aid: Sanchez, Coello, El Greco etc. and the anonymous and crude provincial painters as well as consulting the book of portraits by Pacheco. Grateful thanks to The Lazaro Galdiano Museum in Madrid. The multi-colored portrait is depicted with tasteful objects of the time. The portrait has a forced perspective and somewhat flat to give the effect of a touch of being naive but the character has a lively intellectual face and a crafty look in his eyes which calls out to the viewer and detains him; making him glance over the painting and its distinct messages in the library’s background which contain volumes of books emphasizing his preferred authors, giving examples of his knowledge and possessions: Cicerón, Platón, Terencio, Horacio, Marcial, Ennio, Quintiliano, etc. 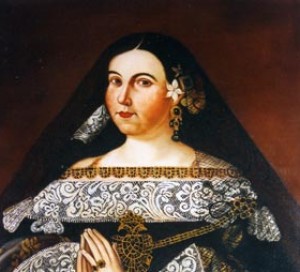