Born in Bilbao, Spain, 1960.
Francis focused on the Art of Portraiture.
He’s currently enrolled at UNED, majoring in History.

In the early 80’s he starts his career in the field of illustrations, comics and drawings made in black and white. He founded the underground publication Neo Ama de Kass

In the mid-80’s, he discovers COLOR and religiously submerges his palette in it.

Gustav Klimt is a notorious influence during this period.

1985 – Selected for Eribil-85. Foral Delegation in Vizcaya. Selected for the 5th Comic and Illustration Salon in Barcelona. Exhibits in the Cultural Center in Getxo, Vizcaya “Art-Design 15”, as well as in the Juan Larrea Gallery in Bilbao.

1986 – Selected for The Bizkaiko Artea. Foral Delegation in Vizcaya. Selected for “Imagine Euskadi” in Central Hispanic Bank. Exhibits “Arthletic” in the Elcano Cultural Center and in Arteren-Alde.

1988 – Individual exposition – The exhibit consists of Portraits for the Hispanic American Bank Gallery in Bilbao.

During this Parisian Period, lasting nine years, his paintbrush drips with sobriety and Classicism.

1993 – Shows “Henry VIII and His Six Wives” Collection at Casa Décor in Madrid.

1995 – Individual Exposition – Exhibits a selection of his Parisian Period artwork along with the Tudor and Hapsburg Family Collection, at the Prado Hotel Palace in Madrid.

1996 Shows the series “Maria de Medicis” after Rubens at Casa Décor in Madrid.

Since 1999, he lives and works in Madrid in Barrio de las Letras.

His portraits show their strenght and diversity.

2001 – Participates in the traveling show “Angels, Messengers of the Gods” at the Celestial Museum, with “Consoling Angel”

2003 – Exhibits Portraits “Illustrious of Vizcaya ” at the Foral Delegation Gallery in Vizcaya, in Bilbao

2004 – The Caixa Foundation entrusts him to carry out imaginary representational portraits of the main driving precursors for the pilgrimage to Santiago de Compostela, by the Way of St. John The Great, commemorating the Jacobean Year and its traveling exhibit Europa fue Camino.

2005 The Real Madrid & Barcelona Merchandising Company puts him in charge of painting the portraits of major-league soccer players: Beckam, Casillas, Deco, Etoo, Ronaldino, and Ronaldo. Painting over and giving the final touch on small, prototype sculptures

2006 Starts the series of Roman emperors and classic antiquity themes.

2007 Exhibition in november, in the prestigious exhibition of dogs (national and international) in Torre Pacheco, Murcia of his dog portraits. 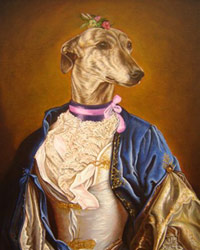 2008 Covers for Cervantes’s novels “El coloquio de los perros” and the analysis of the text.

In november he exhibits his dog portraits in Torrepacheco, Murcia. He paints the portraits of the winners of the dog international contest.

With the imaginary portrait ofGregorio González, Illustrious of Rioja

2011. 6th April. Due to the party of the literary magazine “El Dodo”, virtual magazine of satire and culture, he presents a selection of his canine portraits. See the pictures

19th – 24th may. Exhibition in th gallery-museum Rosmolen of Zeddam, the Netherlands. He joins “Encuentros“, an exhibition of spanish artists, organised by the Amsterdam Hispanic Institute.

18th june. Homage by the Burgalesa-Soriana Canine Association for his canine portraits in the National and International Exhibition in Medina de Pomar. They give him a commemorative plaque during the homage-dinner they offer him.

26-31 july. Group exhibition in the chapel of the Magi in Doetinchen. Holland.

20-23 october. To celebrate the 5th centenary of Fray Antonio Montesinos’ sermon, presentation of the imaginary portrait of Fray Bartolome de Las Casas and the influence of his sermon in his awake of conscience, in the Dominican convent of San Esteban in Salamanca. See the pictures

11th 0ctober – 31st December. Due to the 500th Anniversary in the Bilbao Consulate, his copy of a painting by Paret y Alcazar “Vista del Arenal de Bilbao” (18th century) is exhibited in the Museo Vasco de Bilbao Euskal Museoa. See the picture

2012 – The portrait of Romeo is chosen for the cover of “Werte, Wandel,Weidwerk”, the book about hunting from Alexander Schwab, the swiss writer, philosopher and historian. See the pictures

2012 – Cover for the american edition of the book “St. James´Rooster”, by Tracy Saunders, with the imaginary portrait of Diego Gelmírez, bishop of Santiago de Compostela.

2013 April – The fanzine – Neo Ama de Kass magazine, created and directed by Francis throughout the 80s, becomes part of the collection of the Library in the Reina Sofía Museum, in Madrid. See the Fanzine here. 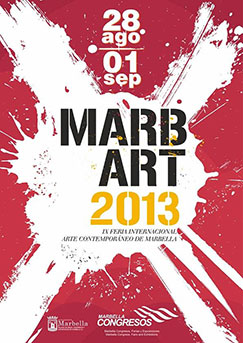 20th may – 2nd july 2017. Exhibition at Boadilla del Monte Palace due to the III Centenary of Ventura Rodríguez’s birth date 1717-1785
He joins the exhibition with a copy of Goya’s portrait on Ventura, that is located at Stockholm’s Museum.
De Blas has added a sign on the bottom to enumerate his merits and a selection of his works. July 3rd, the police takes down a false portrait, as a result of a criminal offense against intellectual property, in Albacete.